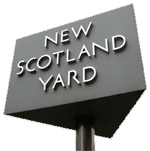 February 08, 2013 “Information Clearing House” – People think I’m anti-police. I’m not … but I do despise corrupt coppers who think they are above the law.

And when it comes to the guardians of the law in the UK the main target of my criticism is usually the world famous Metropolitan Police and with good reason. My first memories of their bad behaviour stem from the 1980s when I was working as a regional journalist.

Coming from a coal mining community in the North, I will never forget how the “London Filth” , as they were referred to by strikers, waved their payslips and overtime bonuses at the pitmen on the picket lines during the Miners’ Strike of 1984.

They goaded the heroic colliers, especially during the Battle of Orgreaves which is soon be the subject of an investigation into claims of fabricated and co-ordinated police evidence. A public inquiry will probably be too little, too late but like Hillsborough, the liars need to be exposed and justice needs to be delivered.

But back to the reputation of the Met; during the Miners Strike not even their own police colleagues bussed in from other outside forces felt at ease sharing their South Yorkshire billets with the London cops, such was their reputation for dishonesty. I remember one Durham policeman telling me how he and his fellow officers had ‘set about’ the men from the Met warning them if any cash went missing from wallets and lockers they would be the chief suspects!

Sadly, three decades on, and nothing much has changed. Not a week goes by when someone further tarnishes the image of the world famous Scotland Yard through greed, corruption, lies and sleaze.