Via: The New York Times 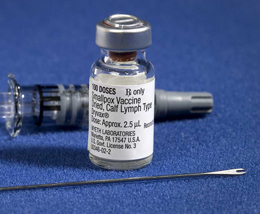 The United States government is buying enough of a new smallpox medicine to treat two million people in the event of a bioterrorism attack, and took delivery of the first shipment of it last week. But the purchase has set off a debate about the lucrative contract, with some experts saying the government is buying too much of the drug at too high a price.

A small company, Siga Technologies, developed the drug in recent years. Whether the $463 million order is a boondoggle or a bargain depends on which expert is talking. The deal will transform the finances of Siga, which is controlled by Ronald O. Perelman, a billionaire financier, philanthropist and takeover specialist.

Smallpox was eradicated by 1980, and the only known remaining virus is in government laboratories in the United States and Russia. But there have long been rumors of renegade stocks that could be sprayed in airports or sports stadiums. Experts say the virus could also be re-engineered into existence in a sophisticated genetics lab.

As part of its efforts to prepare for a possible bioterrorism attack, the government is paying more than $200 for each course of treatment.

Nothing to see here…move along…
-Moose