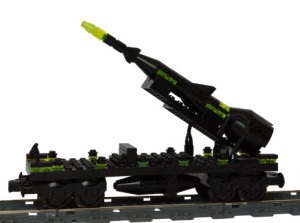 The Air Force wants to upgrade its aging nuclear missiles and the hundreds of underground silos that hold them. One idea it’s exploring: the construction of a sprawling network of underground subway tunnels to shuttle the missiles around like a mobile doomsday train. As one does.

As first reported by Inside Defense, the Air Force Nuclear Weapons Center will award several study contracts next month worth up to $3 million each to research the idea. A broad agency announcement from the Air Force describes the hair-raising concept, intended to keep the weapons secure through 2075, as a system of tunnels where nuclear missiles are shuttled around on rails or some undefined “trackless” system.

The advantage of the world’s deadliest subway: During an atomic holocaust, mobile missiles are harder for an adversary to target than a static silo. Missiles could be positioned at launch holes placed at “regular intervals” along the length of the tunnels.

“The tunnel concept mode operates similar to a subway system but with only a single transporter/launcher and missile dedicated to a given tunnel,” stated the notice. “The tunnel is long enough to improve survivability but leaving enough room to permit adequate ‘rattle space’ in the event of an enemy attack.”

The Air Force hasn’t given specifics on where the tunnels could be built, or how long they’d need to be. But they’ll probably have to be jumbo-sized to “minimize impact from attack during all phases of missions/operations,” the notice stated. The Air Force requires that all research proposals address ways to “minimize likelihood” that unauthorized persons could sneak in, while keeping the system working safely and not sacrificing the doomsday train’s ability to “conduct world-wide operations.”

Again…WTF!?…How can this madness be stopped? Is there something in the water? Maybe it is from playing with trains as a youth…
-Moose