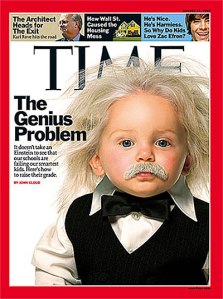 It’s not exactly news that China is setting itself up as a new global superpower, is it? While Western civilization chokes on its own gluttony like a latter-day Marlon Brando, China continues to buy up American debt and lock away the world’s natural resources. But now, not content to simply laugh and make jerk-off signs as they pass us on the geopolitical highway, they’ve also developed a state-endorsed genetic-engineering project.

At BGI Shenzhen, scientists have collected DNA samples from 2,000 of the world’s smartest people and are sequencing their entire genomes in an attempt to identify the alleles which determine human intelligence. Apparently they’re not far from finding them, and when they do, embryo screening will allow parents to pick their brightest zygote and potentially bump up every generation’s intelligence by five to 15 IQ points. Within a couple of generations, competing with the Chinese on an intellectual level will be like challenging Lena Dunham to a getting-naked-on-TV contest.

Maybe they will save us…
-Moose

One thought on “China Is Engineering Genius Babies”