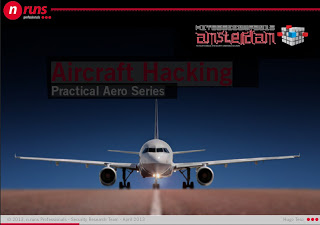 A presentation at the Hack In The Box security summit in Amsterdam has demonstrated that it’s possible to take control of aircraft flight systems and communications using an Android smartphone and some specialized attack code.

Hugo Teso, a security researcher at N.Runs and a commercial airline pilot, spent three years developing the code, buying second-hand commercial flight system software and hardware online and finding vulnerabilities within it. His presentation will cause a few sleepless nights among those with an interest in aircraft security.

Teso’s attack code, dubbed SIMON, along with an Android app called PlaneSploit, can take full control of flight systems and the pilot’s displays. The hacked aircraft could even be controlled using a smartphone’s accelerometer to vary its course and speed by moving the handset about.

I knew they would come up with an app for that…
It’s only a matter of time….
-Moose